Village by the sea, known as Perissa, as seen from the mountain of Mesa Vouno, houses one of the islands largest churches, Timiou Stavrou. Originally built between the period of 1835 to 1840 prior to it being destroyed in the earthquake of 1956. 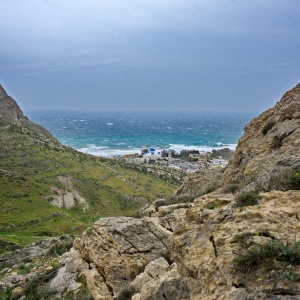 Santorini, the current and more popular name of the island, was believed for many years to have come from the Ventians during a 13th century occupation. However, following the discovery of the ruins of the Basilica of Agia Irini which dates back to the 5th century and a further discovery in 1992 of another construction period from the 6th century, it is now believed was the introduction of the current islands popular name.